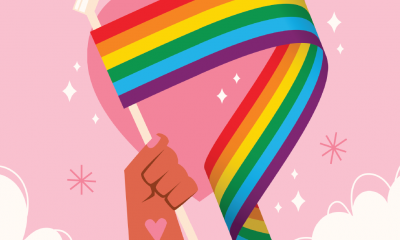 In honor of Pride Month, we’ve put together a list of some of our favorite LGBTQIA+ fiction and nonfiction books. Whether you want to brush up on your civil rights history or read a heartwarming story about love, we have books and movies for every color of the rainbow.

David Bowie Made Me Gay by Darryl W. Bullock

The Gay Revolution: the Story of the Struggle by Lillian Faderman

Love Wins: the Lovers and Lawyers Who Fought the Landmark Case for Marriage Equality by Debbie Cenziper and Jim Obergefell

Stand by Me: the Forgotten History of Gay Liberation by Jim Downs

Trans Like Me: Conversations for All of Us by CN Lester

Charity and Sylvia: a Same-Sex Marriage in Early America by Rachel Hope Cleves

Tinderbox: the Untold Story of the Up Stairs Lounge Fire and the Rise of Gay Liberation by Robert W. Fieseler

Tomorrow Will be Different: Love, Loss, and the Fight for Trans Equality by Sarah McBride

How We Fight For Our Lives by Saeed Jones

No Ashes in the Fire by Darnell Moore

In The Dream House: a Memoir by Carmen Maria Machado

Perfectly Clear: Escaping Scientology and Fighting for the Woman I Love by Michelle LeClair and Robin Gaby Fisher

To My Trans Sisters edited by Charlie Craggs

Karamo: My Story of Embracing Purpose, Healing, and Hope by Karamo Brown with Jancee Dunn

My Butch Career: a Memoir by Esther Newton

The Autobiography of a Transgender Scientist by Ben Barres

Surpassing Certainty: What My Twenties Taught Me by Janet Mock
Sissy: a Coming-of-Gender Story by Jacob Tobia

Redefining Realness: My Path to Womanhood, Identity, Love & So Much More by Janet Mock

The Bold World: a Memoir of Family and Transformation by Jodie Patterson

I Can't Date Jesus: Love, Sex, Family, Race, and Other Reasons I've Put My Faith in Beyoncé by Michael Arceneaux

Queer Virtue: What LGBTQ People Know About Life and Love and How it Can Revitalize Christianity by Elizabeth Edman

Harvey Milk: His Lives and Death by Lillian Faderman

Angels in America: a Gay Fantasia on National Themes by Tony Kushner
Love in a Dark Time and Other Explorations of Gay Lives and Literature by Colm Tóibín

"You Can Tell Just by Looking": and 20 Other Myths about LGBT Life and People by Michael Bronski, Ann Pellegrini, Michael Amico
A Legal Guide for Lesbian and Gay Couples by Frederick Hertz and Emily Doskow
Tomorrow Will Be Different: Love, Loss, and the Fight for Trans Equality by Sarah McBride
Raising Ryland: our Story of Parenting a Transgender Child with No Strings Attached by Hillary Whittington
It's Not Over: Getting Beyond Tolerance, Defeating Homophobia, and Winning True Equality by Michelangelo Signorile
Transgender Children and Youth: Cultivating Pride and Joy with Families in Transition by Elijah C. Nealy

The Pride Guide: a Guide to Sexual and Social Health for LGBTQ Youth by Jo Langford

Is It a Choice?: Answers to the Most Frequently Asked Questions About Gay and Lesbian People by Eric Marcus

It Gets Better: Coming Out, Overcoming Bullying, and Creating a Life Worth Living edited by Dan Savage and Terry Miller

Call Me by Your Name by Andre Aciman

A Single Man by Christopher Isherwood

This is How it Always is by Laurie Frankel

Dodging and Burning by John Copenhaver

The Dime by Kathleen Kent

The Elephant of Surprise by Joe R. Lansdale

A Kind of Justice by Renee James

Stranger on the Shore by Josh Lanyon

Our Dreams at Dusk by Yuhki Kamatani

10 Dance #1 by Inouesatoh
My Brother's Husband, Volume 1 by Gengoroh Tagame

Hitorijime My Hero by Memeco Arii
Cannonball by Kesley Wroten

Are You My Mother? by Alison Bechdel

If I Was Your Girl by Meredith Russo

Symptoms of Being Human by Jeff Garvin

When the Moon Was Ours by Anna-Marie McLemore

We Are Okay by Nina LaCour

Odd One Out by Nic Stone

Simon vs the Homo Sapiens Agenda by Becky Albertalli

Laura Dean Keeps Breaking Up With Me by Mariko Tamaki

History is All You Left Me by Adam Silvera

Drag Teen: a Tale of Angst and Wigs by Jeffery Self

Being Jazz: My Life as a (Transgender) Teen by Jazz Jennings

Some Assembly Required: the Not-So-Secret Life of a Transgender Teen by Arin Andrews

Queer, There, and Everywhere: 23 People Who Changed the World by Sarah Prager

What if It’s Us by Becky Albertalli

The Pride Guide: a Guide to Sexual and Social Health for LGBTQ Youth by Jo Langford

The Prince and the Dressmaker by Jen Wang

The Gentleman's Guide to Vice and Virtue by Mackenzi Lee

Call Me by Your Name

Blue is the Warmest Color

The Kids are All Right